Roots is proud to partner with Medshare to receive much-needed medical supplies. Learn more about how Medshare works in this article from Richmond Confidential, which includes quotes from Roots’ Dr. Noha Aboelata! Many times a day, in Bay Area operating rooms like those at Kaiser Permanente Oakland, nurses lay out a set of surgical tools from which doctors can choose. Surgeons often pick one or two instruments from the bunch, leaving the rest to be discarded.

Rather than clog local landfills, those unused surgical tools now can make their way to Roots Community Health Center in Oakland or Brighter Beginnings Family Health Clinic in Richmond —  thanks to MedShare, a nonprofit with operations in San Leandro. U.S. hospitals produce more than two million tons of such medical waste every year, according to the organization’s website.

“We live in a culture of excess. We just have so much,” said Andrew Pines, Medshare’s executive director for the West Region. Many items that hospitals discard are perfectly useable, Pines said.

MedShare, founded in Atlanta in 1998, adopted a simple business model. It partners with local hospitals, recycling their surplus to local clinics. Its Western Regional Office partners with more than 30 hospital sites in the Northern California region. MedShare trains medical staff to determine what should go into the collection containers.

The nonprofit accepts most unexpired medical supplies and equipment. But it doesn’t accept pharmaceuticals because they require additional levels of licensure and regulatory approval, along with special storage and strict security measures.

There can be many reasons why a hospital would dispose of useable medical surplus. Sometimes suppliers ship hospitals the wrong items, and it’s more cost-effective to donate the unwanted goods rather than ship them back, said Rachael Baker, environmental stewardship manager for Kaiser’s Northern California region. In addition, new technologies or updated regulations may force old equipment out the door. In some cases, where disinfection and sterilization are required but not possible, supplies may need to be discarded.

Kaiser Oakland recently moved and needed to stock the new buildings with items before cleaning out the old facility.

“The material at the old ER was not bad, but just had nowhere to go,” Baker said. “In that case we packaged it all up and donated it to MedShare.”

Once the donated items arrive at MedShare’s warehouse in San Leandro, the volunteers take over. The items go through two sorting cycles. The first sort sees supplies grouped together by categories. Gastrointestinal supplies may be in one section, pediatric supplies in another. Seasoned volunteers take on the second sort, grouping together exact duplicates into boxes to match what one might order from the manufacturer: for example, 12 sets of blood pressure cuffs of the same brand. These boxes are entered into a database and filed away in MedShare’s warehouse coffers.

“We operate by the pull model,” Pines said.  Rather than push supplies out to clinics without consideration for their needs, he said, “we want the recipients to tell us what they need.”

MedShare’s online database allows domestic and international medical facilities to “shop” for their donations. They can browse through MedShare’s inventory and order exactly what they want free of cost, Pines said.

Those unused surgical tools from Kaiser Oakland’s operating room? They end up at healthcare agencies such as Roots Community Health Center in Oakland, one of 20 safety net clinics in the San Francisco Bay Area benefitting from MedShare’s medical surplus donations.

According to Roots’ primary care physician Dr. Noha Aboelata, MedShare plays an integral role in the success of their community clinic.

“We love MedShare,” Aboelata said. “They provide us with pretty much all of our medical supplies here. From the exam table, to blood pressure cuffs, to disposable items like gloves, gauze, Band-Aids, syringes and needles.”

Roots is open to anyone, but primarily serves uninsured and underinsured East Oakland residents, on a sliding scale. Without MedShare, Aboelata said, “we probably wouldn’t be able to provide as many services to as many people. For a clinic like ours, MedShare helps to keep our costs down and conserve our resources so we can take care of more people.”

In Richmond this year, MedShare proved to be vital in setting up Brighter Beginnings Family Health Clinic by supplying two vans packed with supplies and fulfilling about 85 percent of its medical needs.

“They reviewed our application and said, ‘We’ll outfit your four exam rooms with exam tables.’ It was amazing to receive that,” said Drea Riquelme, a clinic site administrator at Brighter Beginnings.

Not limited to local clinics, MedShare’s distribution is global. It has donated medical supplies to over 95 countries, addressing both every day needs and responding to health and environmental crises.

As an increasing number of people are dying of Ebola in several African countries, MedShare launched a humanitarian aid initiative to respond to medical workers’ requests to contain the spread of the virus in Guinea, Liberia and Sierra Leone.

MedShare’s donations, either through large container shipments or by equipping medical mission teams, include various protective clothing items – disposable gowns, gloves, operating room caps, shoe covers, and face shields, all in an effort to protect medical workers from the deadly disease and prevent it from spreading. Bodybags are another somber commodity now needed in areas hit by the Ebola virus, said MedShare’s Pines.

“Our goal is to serve those who are most in need, whether they are here or they are overseas,” Pines said. 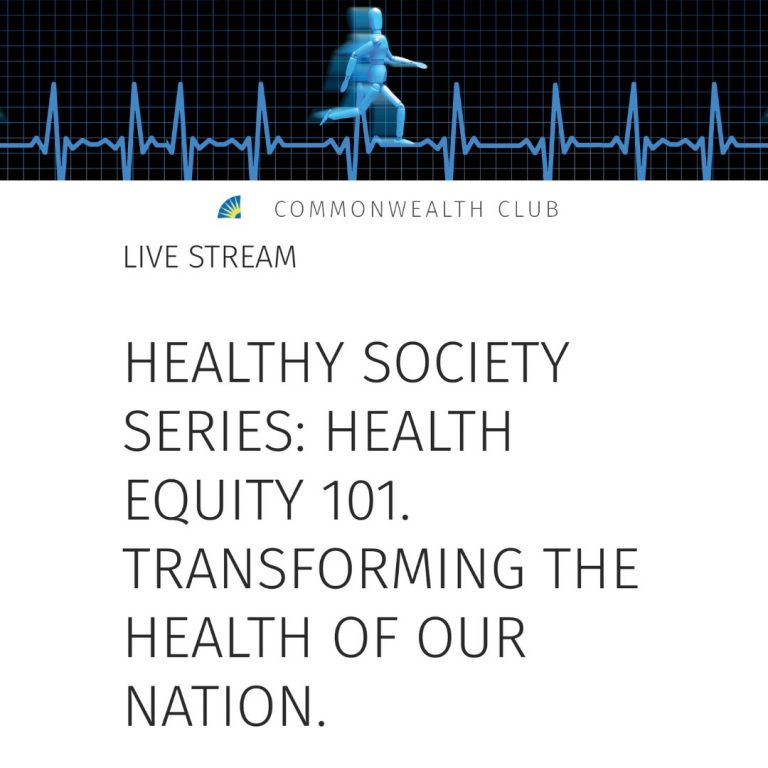 Buy Tickets   Want to attend this program for free? Join today at the Monthly Sustaining Membership level and receive a special discount code to use at check out. Click here to join. The global COVID-19 pandemic has revealed more clearly the huge health and health-care disparities between groups that are closely linked with social, economic and/or…

Originally Posted on August 5, 2013 by aquil naji Oakland is widely known as the home of the Black Panther Party, iconic black politicians, athletes, entertainers, and the 2nd largest population of African Americans in the state of California. The East Bay city is now fortunate to have a health community center that works diligently… 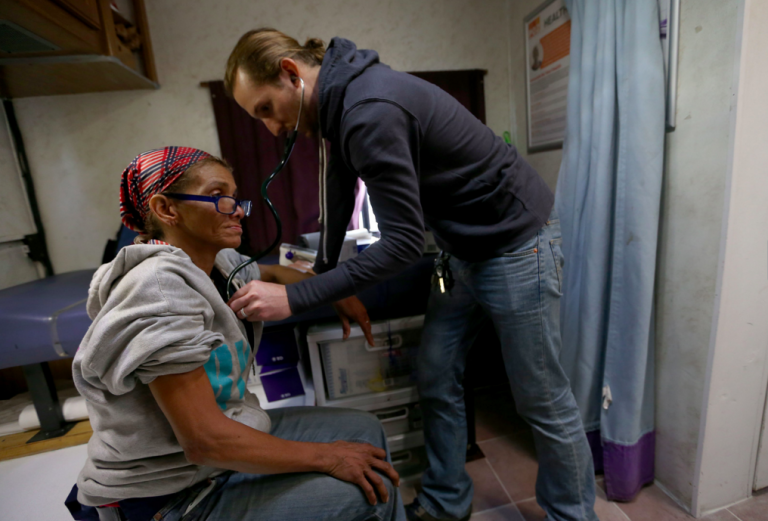 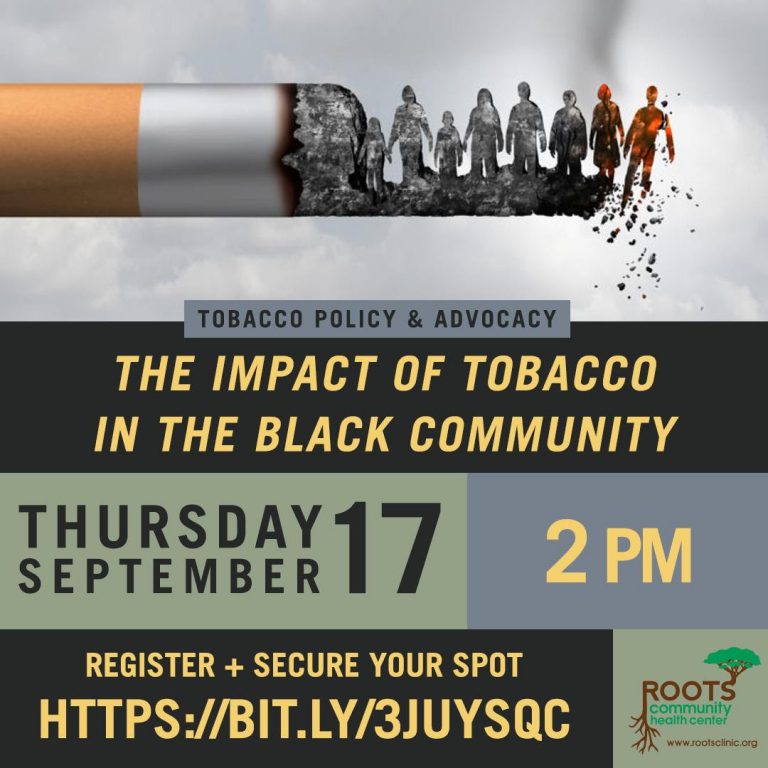 Join us tomorrow for a discussion on the impact of tobacco in the Black community! Register at: https://linktr.ee/rootsempowers #roots #publichealth #community #smokingcessation #smoking #tobacco #community #oakland #bayarea #eastoakland

Where Roots is located, the average life expectancy is 7 years less than the Alameda County average, according to data from 2016.