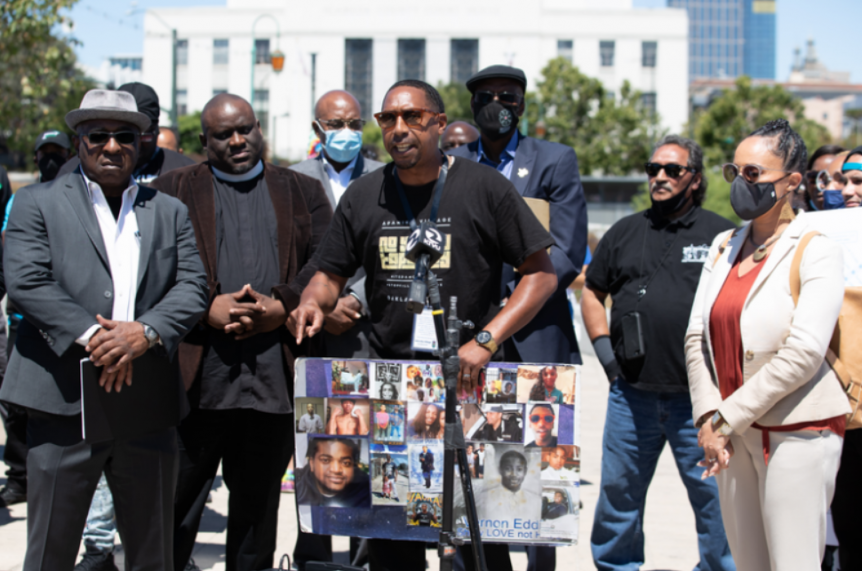 “State of emergency!” a crowd of about three dozen residents and activists repeatedly chanted at the Lake Merritt Amphitheater on Thursday morning. Leaders in attendance represented local organizations such as LIVE FREE, Roots Community Health Center, Fund Peace, Faith In Action East Bay, and Californians for Safety and Justice.

This past Saturday, Lake Merritt was the site of the sixth mass shooting in Oakland so far this year, according to the Bay Area News Group, which used the definition of four or more gunshot victims. A gunman killed 22-year-old Dashawn Rhodes in a crowd of thousands of people at a Juneteenth celebration just before 6:30 p.m. Saturday. Seven other people were injured. Police have not yet arrested the shooters responsible.

“We’re in Armageddon. My city is burning,” said Mistah F.A.B., a three-time platinum recording artist and songwriter, and founder of Dope Era Apparel.

Speakers demanded that Alameda County officials declare gun violence a state of emergency, just like they did with the coronavirus and HIV/AIDS.

Dr. Noha M. Aboelata, CEO of Roots Community Health Center—which offers medical and behavioral healthcare and other services to those impacted by systemic inequities and poverty—said gun violence not only impacts its immediate victims, but generations of people who have to carry the trauma with them. “Things are getting worse with no end in sight,” she said.

The groups are asking the county to invest nearly $100 million of the $324 million of pandemic relief funding allocated to Alameda County from the federal American Rescue Plan to Black and brown communities. Specifically, they want funding to support the “Black Community Recovery Plan” created by the African American Response Circle, a group formed to address the pandemic’s disproportionate impact on people of color. Their plan calls for investing in housing, economic self-sufficiency, and spiritual and physical health in communities impacted by gun violence.

Here’s what else is going on in Oakland:

Watch: What’s next for the arts in Oakland?

Oakland’s new budget doesn’t ‘defund’ the police, but it boosts funding for alternatives

That includes giving 500 individuals or families $1,000 in rental assistance each month for a year, up to $50,000 for 250 individuals or families for down payments on properties, and $8 million for developing more affordable housing. The largest investment would be $15.75 million to expand Oakland’s basic universal income pilot to give $750 a month to 1,000 families in Oakland and 750 families in Hayward and unincorporated areas of Alameda County.

In a letter to the Alameda County Board of Supervisors dated June 7, Greg Hodge of the Brotherhood of Elders Network—an intergenerational network of men of African ancestry who support Black boys and young men, and the group that established the African American Response Circle—said their recovery plan addresses many of the structural inequities highlighted during the pandemic.

The group says the county has not yet responded to their letter with these asks.

“How is it that we have to beg Alameda County to use the hundreds of millions of dollars that have been set aside for the healing of our community, as if they need the money but the people of Alameda County don’t?” said the Rev. Michael McBride, lead pastor at The Way Christian Center in West Berkeley.

The Black Community Recovery Plan shares a few similarities with President Joe Biden’s new strategy to combat gun violence nationwide, such as investing in community violence interventions and expanding programs shown to reduce crime. According to senior White House officials, homicides nationally are up 24% in the first quarter of 2021 compared to the same time period in 2020.

In Oakland, shootings causing injury and death are up 75% compared to last year, according to the Oakland Police Department. As The Oaklandside previously reported, shootings were nearly as lethal as COVID-19 last year.

But the plan put forward by local leaders of color on Thursday differs from Biden’s when it comes to the role of police in repairing harms done to Black and brown communities. Biden’s plan gives more money to police while the Black Community Recovery Plan would give no additional funding to the police department in favor of more community-based efforts.

At the same time the groups held their press conference at Lake Merritt, the City Council was debating how much to spend on the Oakland Police Department in the city’s next two-year budget cycle. Mayor Libby Schaaf and some councilmembers support increasing the police’s budget, while Council President Nikki Bas and others want to reduce police funding to invest in violence prevention and non-police solutions.

Tinisch Hollins, executive director of Californians for Safety and Justice, said because the violence and unaddressed trauma among Black Americans “is literally killing our people” the United States can no longer simply rely on incarceration and policing to deter crime.

“People don’t understand: Police do not prevent crime, they respond to crime,” she said, adding that interrupting systems that cause people to resort to violent crime is key. “Unless we respond in a way that allows us to give the resources directly to the people who have the relationship with people on the ground, it will continue.”

“In our communities, where we come from, we kind of shy away from admitting we even have those problems. We don’t admit we have mental health issues,” he said. “We don’t admit that losing 10 friends in a year can cause traumatic syndromes in your mindstate.”

Activists want to get federal money into the hands of those in the community who could start addressing underlying issues before they become larger problems. Just as it did with COVID-19, Alameda County declaring an emergency would remove the red tape so money could be freed up faster. Philadelphia passed a similar emergency declaration over gun violence, but it’s mayor refused to sign the order.

The Alameda County Health Care Services Agency is the department that drafts health emergencies that are then approved by the Alameda County Board of Supervisors. In a statement to The Oaklandside, Jerri Applegate Randrup, a spokesperson for the health agency, thanked community leaders for bringing attention “to this life and death issue.”

“As with other complex health issues, there is more work to do if we want all residents to lead safe and healthy lives,” Applegate Randrup said. “We look forward to partnering with local leaders, community organizations and residents to identify and address the key drivers of violence in our communities.”

Meanwhile, California State Attorney General Rob Bonta, who represented Oakland in California’s State Assembly before his new role, issued a statement Thursday calling for the statewide implementation of programs like Operation Peacekeeper and Operation Ceasefire that have helped reduce gun violence in communities like Stockton by directly funding community resources in high-crime areas.

“Community-based strategies, like those implemented in Stockton, prevent gun violence by giving people critical support and resources on the front end, before a tragedy occurs,” Bonta said.

To those gathered at Lake Merritt Thursday morning, addressing the gun violence epidemic  means getting down to the roots of the problem before they’re allowed to spread further. And money to fund those efforts can’t come fast enough.

“Thoughts and prayers are great, but we need resources,” Hodge said. “We’re not asking. We’re demanding.”

We believe all Oakland residents deserve more in-depth reporting, perspectives, and resources to help us better enjoy, understand, and impact our beautiful city.

If you can, we hope you’ll help  keep our journalism free for all readers by becoming a monthly member of The Oaklandside.