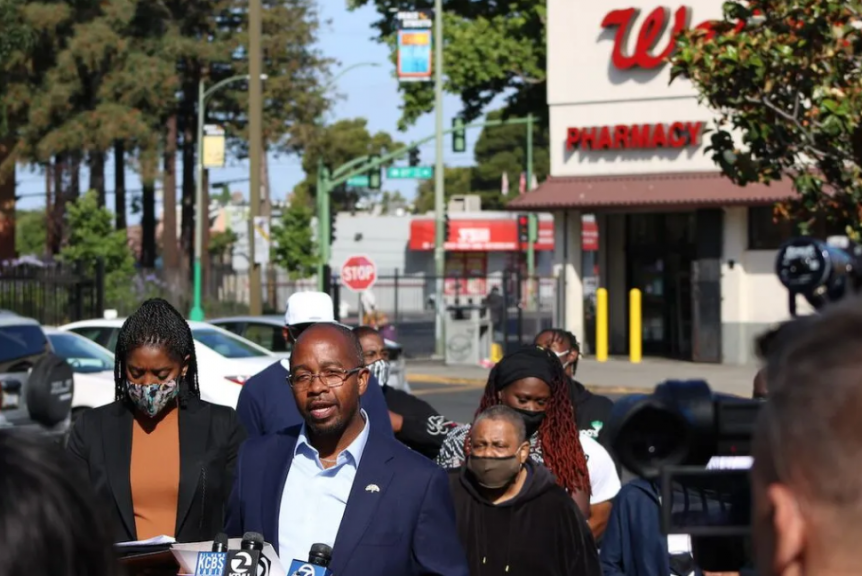 Councilmember Loren Taylor speaks Thursday morning at a press conference at the Walgreens at 81st Avenue and International Boulevard, which is closing on July 29. He and others are hoping it will stay open until its lease runs out in January 2022 so the community can better prepare for not having a local pharmacy. Credit: Brian Krans

With a month’s notice, Walgreens said it will close its 81st Avenue pharmacy next week. Residents, city officials, and health care workers want more time to prepare the community.

The marquee outside the Walgreens at 81st Avenue and International Boulevard in deep East Oakland says the store is now hiring. But a sign inside the front entrance states that the pharmacy will be permanently closing July 29.

That’s of concern to many people in the area, including Alma Ferguson. She’s been living at the Allen Temple Arms retirement home across the street from the Walgreens since 2002. Ferguson, who turns 90 on Friday, said many residents of the senior home have mobility issues, so it’s hard to get to another pharmacy.

“We need this so, so very badly and it seems like sometimes, the seniors are kind of put to the side and they are an afterthought instead of a forethought,” Ferguson said Thursday morning at a press conference called by Oakland councilmembers Loren Taylor and Treva Reid, who represent East Oakland.

In a letter dated July 16 and addressed to three senior Walgreens executives, Reid and Taylor wrote that the city of Oakland is interested in working with the company to keep the store open, at least through the current lease that runs through January 2022.

“This would allow the City to inform residents of the store’s closure and [give] the community adequate time to find a suitable alternative,” they wrote in their letter. “Failure to provide an extension will leave many of our residents in the surrounding area with little, if any, notice on how to move forward.”

During the pandemic and last year’s racial justice protests and looting, many Oakland pharmacies, including Walgreens and CVS stores, temporarily closed, causing health experts concern that low-income communities of color wouldn’t be able to easily access medications and other health supplies. A permanent closure of a pharmacy in deep East Oakland will hit the community hard, locals say.

Willie Stevens, 73, is another Allen Temple Arms resident. He and his neighbors depend on Walgreens for everything from prescription medications to flu shots.

“We’re begging Walgreens to give us a little time to adjust to the fact that they will be closed and we kind of accepted that fact that it’s going to happen,” he said. “But to give us some time to at least get prepared for that closing.”

Noting the health disparities facing her district, Reid said that Walgreens is the only pharmacy in District 7, which she represents.

“It is disheartening and it is unconscionable that with less than one month’s notice, Walgreens has opted to end its lease early and shut down one of the few pharmacies in East Oakland by next week,” Reid said.

Taylor said he only learned of the store’s closing after someone posted a photo of the sign on the front door on social media.

The sign at the front door also informs people their prescription records are available at all Walgreens locations, and suggests that they should go to the company’s location at 5809 Foothill Blvd., more than two miles away, or nearly 25 minutes each way using public transportation. The nearest other pharmacy in the area is a CVS at the Eastmont Mall, about 20 minutes away via bus.

Inside the Walgreens store on Thursday, large sections of shelves were empty, but there were plenty of disposable masks, protective gloves and hand sanitizer on shelves and end caps, constant reminders of the need for protective measures during the ongoing pandemic. Some seasonal summer items were available, but most of the food in the refrigerated section had not been restocked.

A uniformed Oakland police officer had backed up a marked squad car on the sidewalk in front of the store before grabbing a beverage from the cooler and having a seat in a chair at the front door while talking on his cell phone. Walgreens and other major retailers recently struck a deal with OPD to hire police officers who work overtime to guard their stores.

An older woman with her hair wrapped up saw the sign at the front register that said the store was closing on the 29th. She asked the clerk: “The pharmacy is staying open, right?” It will not, he replied.

A Change.org petition asking Walgreens to keep the store open gained more than 2,300 signatures as of Thursday morning.

One of the signers was Dr. Joe Cartwright, a primary care physician who said many of his patients use the 81st Avenue Walgreens. He said his heart sank when he heard it was closing because it serves as a hub in the community. He said while some specialty pharmacies can help fill the gaps for prescriptions, it’s not the same as having a brick and mortar store nearby.

“There are many instances when patients need certain medications immediately—antibiotics, inhalers, etc.—and a physical pharmacy near one’s home is crucial for this,” Cartwright told The Oaklandside.

The petition claims that one reason Walgreens is closing the store is because of “the high percentage of low-income Medicare and Medicaid patients” who get their prescriptions filled at that location, resulting in a lower profit margin.

Walgreens’ corporate press office did not respond to questions from The Oaklandside about their plans to close the pharmacy.

According to Taylor, Walgreens has said that their landlord wouldn’t agree to a 50% reduction in its rent, and “leakage,” more commonly known as shoplifting, has cut into the store’s margins.

Reid said Walgreens wanted to end its lease six months early to “get ahead of the holiday season,” meaning it would close the store before stocking it with the usual holiday items. “It is disrespectful to think that their priority of getting ahead of a holiday season carries more value and weight to those in this community who are facing incredible challenges,” Reid said.

The majority of the medications Dr. Danielle Williams of Roots Community Health Center  prescribes are filled by the 81st Avenue Walgreens because most of the patients she serves live in the area. This includes very low-income people who live in their cars or on the streets, so they don’t have much money to get on a bus to get a prescription filled.

“It is a major disservice, especially with the timing. If anything, we just had a little bit more time to plan accordingly,” Williams said. “Transferring medications is not an easy task, so it’s just going to cause a lot of disservice to the people of this community.”

Selena Wilson is the vice president of organizational effectiveness at the East Oakland Youth Development Center, which is across the street from the Walgreens. She grew up within walking distance of the store and residents have counted on it for everything from children’s art supplies to  microwaveable dinners to life-saving medications.

Williams was one of several people who spoke at Thursday’s press conference who brought up Walgreens slogan, to “champion the health and well-being of every community in America.” She said the company’s decision to close the 81st Avenue location with less than a month’s notice is antithetical to this.

“We are in Deep East Oakland and this is a community that is not only underserved, but we are often deeply, deeply, profoundly neglected by systems of care, and this is just another example of us not being counted as a part of every community that is deserving of the utmost care,” Williams said. “We are going to come up with a solution, but what I ask is that we’re giving at least the time and the space to formulate that solution, so that we can make sure that our community in Deep East Oakland has what we need and what we deserve.”