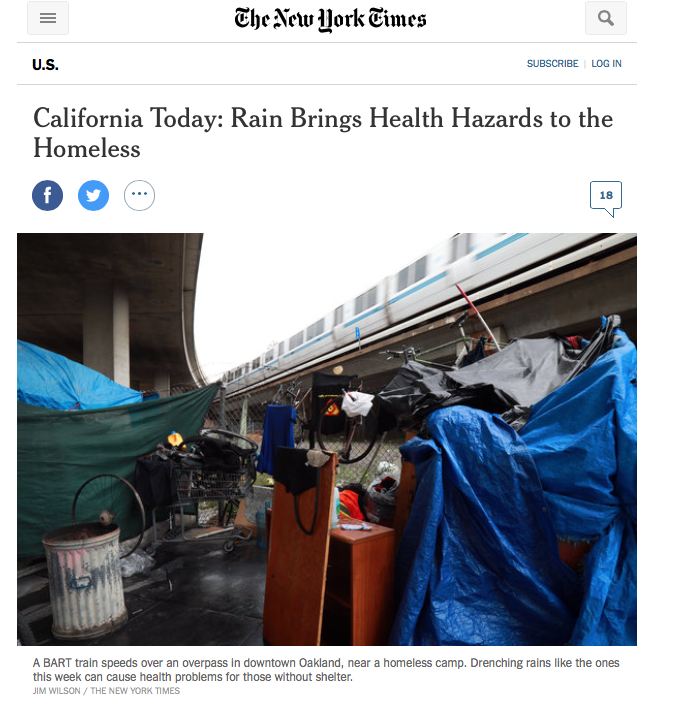 The first drenching rains of the season, an atmospheric river that came ashore this week, flooded roadways and snarled traffic in the San Francisco Bay Area on Thursday. For one group of residents, the region’s homeless, the rains were more than just an inconvenience.

Damp and cold conditions bring influenza and infections to the crowded tent encampments that have swelled in recent years as soaring property prices have sent more people onto the street.

“We have camps where we can have 50 to 100 people living in proximity,” said Dr. Jason Reinking, a medical doctor who focuses on the homeless as part of a program run by the Roots Community Health Center in Oakland. “Viruses or bacteria can spread quite aggressively.”

California has the highest number of homeless people, around 118,000, followed by New York with 86,000, according to last year’s count.

Dr. Reinking says the damp conditions outdoors are particularly dangerous for diabetics, who are more susceptible to foot infections that can sometimes become so severe they require amputation. He struggles to keep up with needs of his patients.

“Homelessness is an epidemic in California,” Dr. Reinking said. “We are grossly understaffed and under-resourced to respond.”

Winters are of course not as extreme in Northern California compared with cities in the Midwest or New England.

But a number of deaths from exposure were reported last winter in the Bay Area.

Oakland has winter shelters, which opened this week, but some homeless people are reluctant to use them because it means leaving their belongings behind, according to Lara Tannenbaum, the manager of Community Housing Services for the City of Oakland.

The city also hands out hats, coats and blankets.

At dusk on Thursday, groups of men and women huddled in camping tents under a freeway in Oakland, sheltered from the steady rain but not the dampness. “It’s hard to get warm,” said Eugene Jacobs, 27, who has been homeless for the past three years. “We have to change clothes three or four times a day. Everything keeps getting wet.”

“This is going to be hard,” Mr. Jacobs said about the onset of winter. “And this is the least of it.”