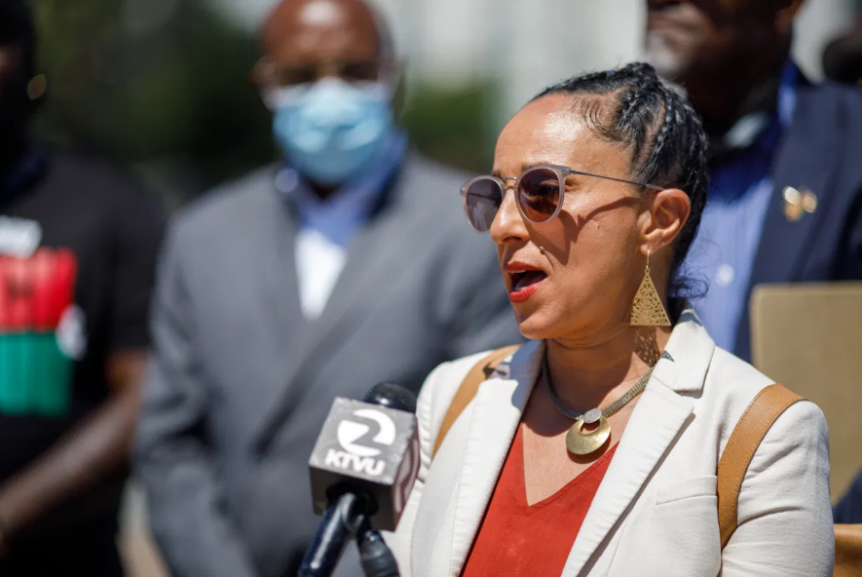 “Without investment, we will continue to die”

Speaking from Lake Merritt on Thursday — where a mass shooting on Juneteenth left one young man dead  and seven more people injured — East Bay leaders and community members lamented the traumatic effects of gun violence ravaging Oakland and called on the Alameda County Board of Supervisors to focus recovery efforts in East and West Oakland and Fruitvale, among other neighborhoods.

Berkeley Pastor Mike McBride led a call-and-response — “State of emergency! State of emergency!” — with the crowd of about 100 people before expressing his frustration that communities most affected by gun violence have yet to receive a firm commitment for federal relief efforts.

“That state of emergency is the trauma, pain, and the scourge of violence that is interpersonal in nature but is fueled by the trauma of our people,” McBride said to murmurs of agreement. “I don’t know how a narrative can exist among so-called progressive elected officials at the county level that the safety of Alameda County citizens is not their responsibility.”

The money would stem from President Joe Biden’s American Rescue Plan, which will send billions for pandemic relief — helping with vaccination efforts, schools, rental assistance and more — to counties and cities across the nation. Alameda County is expected to receive about $324 million.

In a June 7 letter addressed to District 5 Supervisor Keith Carson, the African American Response Circle, which represents about 90 local organizations and also headlined Thursday’s event, laid out how its vision for how the $100 million should be prioritized to re-invest in Black communities and help to stem the wave of gun violence, which experts say is directly linked to the pandemic’s fallout.

The plan asks for nearly $16 million to expand a universal basic income program for Oakland families; $10 million for grants up to $250,000 each for 40 Black-owned businesses, a little over $9 million to provide 1,000 Black residents with an hour of culturally competent counseling each week for a year, and down payment assistance of up to $50,000 for 250 people, among various other services. In total, it would cost about $99 million.

“In all jurisdictions covered by our Plan, the focus will be on the Black community: our outcomes are the worst and our need the greatest, reflecting the generational and unequivocal havoc that has been wreaked on us throughout our history in the County,” it reads. “Simply put, without investment, we will continue to die.”

Yet leaders said Thursday that they had not yet received a response from the Board of Supervisors to the letter. In a brief call Thursday, Supervisor Carson said that he personally acknowledged the plan in a Zoom meeting with AARC leaders a few weeks ago and that the county was looking at it “very seriously.”

Other organizations, however, have submitted their own requests for funds, and discussions about how to allocate ARP dollars won’t take place until August, Carson said.

“We’re trying to come up with a comprehensive approach to it that will be transparent and public when we get ready to talk about how do we — over the next four years — how we do that in a way that is most impactful to the diverse groups that have approached us and need additional attention,” Carson said.

Dr. Noha Aboelata, founder and CEO of Roots Community Health Center, said that Oakland’s gun violence crisis reaches beyond the question of funding: Compared to this time last year, shootings citywide are up about 77%, with 330 shootings recorded that have caused injury or death.

The emotional toll is incalculable, she said.

“It is having devastating ripple effects that can take generations to heal,” Aboelata said. “We have children, we have girls being gunned down in these streets. The frequency of these shootings and loss of life is getting to a point where we’re having to be desensitized just to cope.”

“We cannot allow this desensitization to set in,” she added.

Rapper and Oakland native Stanley Cox, better known as Mistah F.A.B., took a moment to acknowledge the families of victims as the crowd went quiet. The pain of losing friends again and again to gun violence, he said, lingers forever.